Looks like it’s been a while since I posted anything here. Here are some updates on my life:

Anyhow, I have begun getting baby girl’s room ready, and I can’t even believe that I’m going to have a real nursery for the first time (!). I have an entire 13′ x 12′ room to dedicate to just the baby. Going for a mint-and-pink theme. I still have Constantine’s 4-in-1 crib/changer combo (crib, toddler bed, changer, full size bed), so that’s already set up. DD (b. 2006) came in while I was working on the room yesterday and called the room “small.” I laughed so hard. She lived in a walk-in closet for most of her baby/toddler years and now lives in the original master bedroom of the house (18′ x 11′), and now she calls the baby’s room “small.” I died.

I got this unfinished dresser from Ikea this weekend and painted it. The bottom drawer is teal, the middle is mint, and the top is pink. I can’t wait to do the rest of the room! 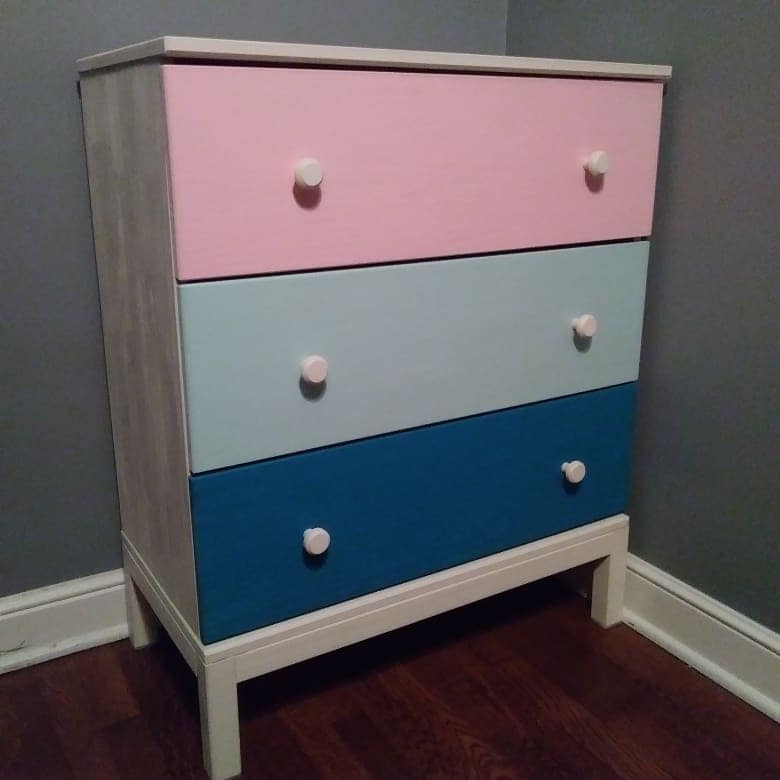 Remember how part of the reason that I hired the doula that I did was because she did professional birth photography?

Well, those photos are finally in. Though a savvy person could figure out who I am, I’m still going to stay as anonymous as possible, so I have blurred myself out and excluded any pics that are dependent on my face (which means most of my in-labor pics). The rest are as follows (massive photo dump in one post):

Me at my baby shower, my daughter Harley opening Constantine’s presents for me on the left. Personally, I think I made being 8+ months pregnant look good. 8-24-2013

END_OF_DOCUMENT_TOKEN_TO_BE_REPLACED

Serge Constantine, a few hours after he was born. Called by his middle name or “Costa” for short.

My son was born at 6:10 PM on Sunday evening. I had been in labor for just around 8 hours, and had only been on the 1-2 ml/hr Pitocin drip for the first 5 hours. Beyond that (and the attendant continuous fetal monitoring), the only intervention that was used was the vacuum extractor.

Constantine was placed on my chest immediately, snuggled up under my hospital gown skin-to-skin with a warm blanket placed over us, and he stopped crying almost instantly. He was very awake and alert. They waited for the cord to stop pulsing, then clamped it and asked my husband if he would like to cut it. My husband is rather squeamish about blood, so he kind of surprised me when he said yes and did the cutting. He came around to the side of my bed to look down on the two of us, and I noticed that he had tears in his eyes. As for Costa, I thought he looked like a little cherub, so chubby and with golden blonde hair. (The blonde hair really, really surprised me. My husband and all of his siblings have dark brown or black hair, and my natural hair color is medium golden brown. But all of my siblings were blonde as babies, so Costa seems to have gotten those genes or something.)

END_OF_DOCUMENT_TOKEN_TO_BE_REPLACED

What a busy day I had today! In the morning I was preaching at the retirement community where I volunteer with the chaplaincy ministry, then I went to my prenatal appointment, and immediately afterwards I went to set up for tomorrow’s election, where I am serving as an election judge. I find it satisfying to be staying so busy.

It was the 16-week prenatal today. My doula came to the appointment. I think her and my hot  doctor will get along well. She seemed to agree with my assessment of his looks. Always good to have a second opinion when it comes to prenatal care, right? 😉 He mentioned that he has never worked with a doula before, and he’s done 48 deliveries now, so I hope this is a learning experience for him.

END_OF_DOCUMENT_TOKEN_TO_BE_REPLACED

I found this beautiful picture at Natural Native Doula, a Pennsylvania doula’s site

I just got done interviewing my second doula. I don’t think I’m going to interview any more; either of these would make for a fine doula. Here’s what both provide:

I’m leaning towards Doula #1 in spite of the higher price tag. While the cons balance each other out, she has more pros. I could certainly buy a lot of baby stuff with an extra $400, but I’d also really like professional birth photography, and hiring even a cheap birth photographer would probably be another $200-$300, and then I’d have another person in the labor and delivery room. For the record, Doula #1 has 14 years of experience, while Doula #2 has 2 years of experience.

I know I have fewer regular readers than I can count on one hand, but any feedback?

Hugs! And Traveling During Pregnancy

Took my daughter to see Dr. Sark for her follow-up appointment on her ear infection today. Before he came in I was seated on the examination table, and he surprised me by crossing immediately to me and putting his arms around me. I didn’t realize what he was doing getting so close to me and I rather stupidly blurted out, “What’s this?” He replied, “This … is a hug.” “Okay … so we’re on a hugging basis now …” I said, trailing off. It kind of took me by surprise.

I asked Dr. Sark about travel during pregnancy, explaining that my sister is engaged and angling for a wedding date in November of next year. He replied that he wouldn’t want me traveling after four months.

“Four months!” I said in disbelief. He said something about being old-fashioned and not wanting pregnant women jetting around everywhere.

I’m sorry, but no. Even if I didn’t have the wedding, I have academic conferences to attend in the summer that are important to me. I only need a doctor’s permission to fly with certain airlines during the final month of pregnancy, and quite a few of them have no requirements for a doctor’s permission at any point of the pregnancy.

So, I guess I shouldn’t count on getting permission from him if I need to do any traveling during my final month of pregnancy. Which is fine. I’ll just have to stick to the airlines that don’t require it.

In other news, I asked him at an appointment several months ago if I could have a doula at my delivery if he were my doctor, and he said he’d get back to me on that. Today he finally got back to me, and he said a doula would be fine. So yay for that.

The Doula Advantage by Rachel Gurevich (2003) — I liked it. It builds a strong case for why a woman should want to hire a doula to support her in labor and delivery, and also talks about postnatal doulas and antenatal doulas. Generally does a good job of citing scientific studies to support its points. The writing isn’t always strong, and the book gets rather repetitive, but overall, it’s a solid book in favor of doulas. I like how it does not portray doulas as a mere fixture of the NCB/homebirth movement, but makes it clear that they can be useful even when one is having an epidural or other interventions. 4/5 stars.

Lying-In: A History of Childbirth in America by Richard W. Wertz and Dorothy C. Wertz (1989) — This is a scholarly text originally published in the 70s, updated and re-published by Yale Press in 1989. I loved it. It’s a general survey of American attitudes towards and practices involving pregnancy and childbirth. It traces the shift from community-supported, midwife-attended, mother-centered childbirth in the colonial era to the current world of physician-attended, medicalized childbirth that emphasizes the safety of the baby and the creation of perfect children even at the expense of the mother. It covers major developments in obstetrics (anesthesia, forceps, c-sections) and medical misfires (puerperal fever epidemic, Twilight Sleep). The Wertzes’ sources are not always terribly thorough, but overall it’s a strong text that really gave me a good perspective on where childbirth has been and how we arrived at where we are. 5/5 stars.